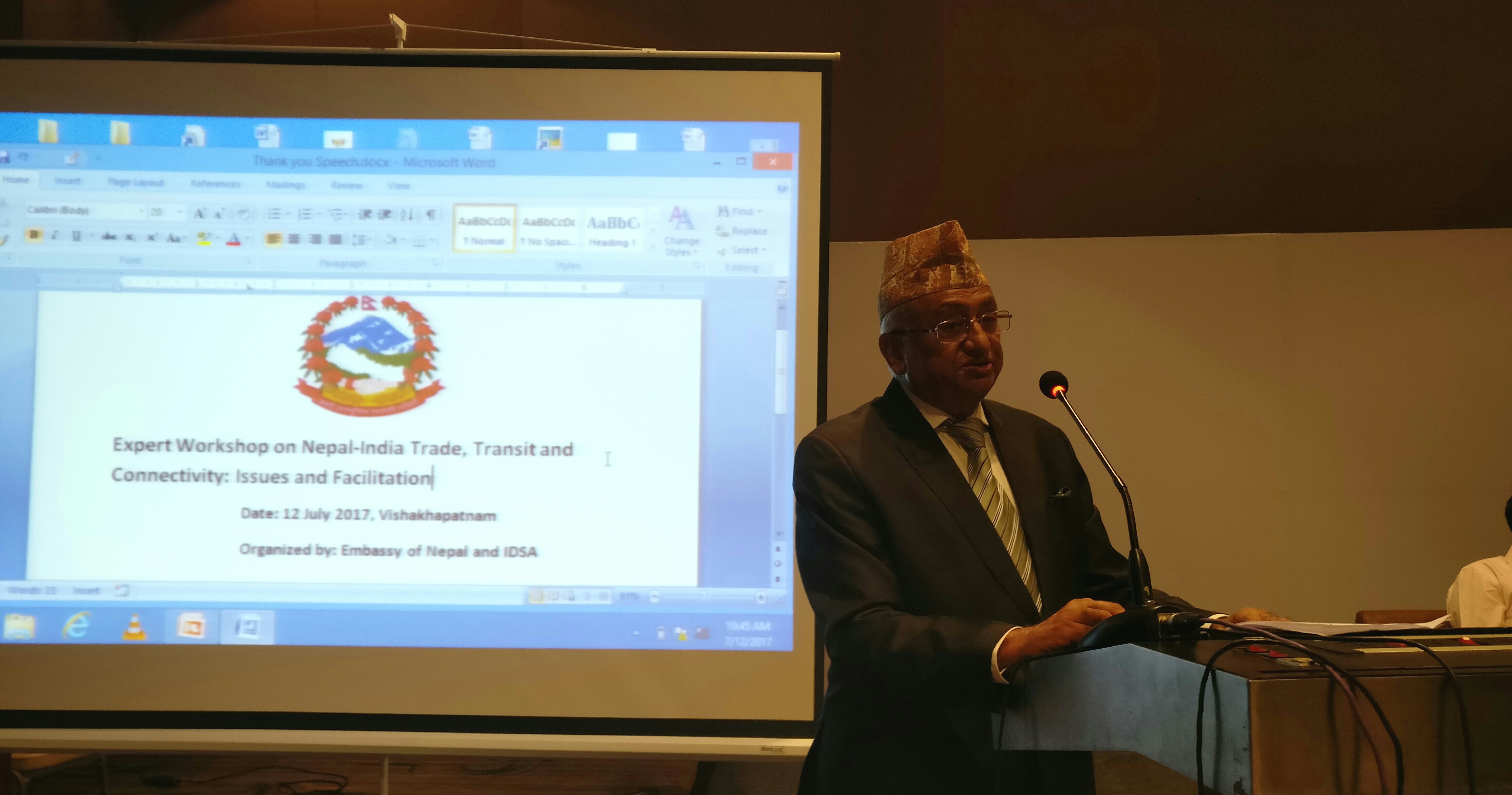 Thank you very much for joining us for this important workshop on the topical themes of trade, transit and connectivity.

Some of you have travelled a long way from Nepal and some of you from different parts of India to attend this event and contribute to the discussion. We are thankful for your dedication of time and wisdom. We are also thankful to IDSA for helping us to make this event possible.

The Emassy of Nepal and IDSA are jointly organizing this programme as a part of the Embassy’s economic diplomacy initiative. We have chosen this smart and growing city as the event venue in the context of the important bilateral agreement last year regarding the use of Visakhapatnam Port by Nepal. As our traders are keenly assessing how they can make the best and most beneficial use of the highly modern port facilities available at Visakhapatnam for transit, it is logical that we choose the city to hold this discussion on trade and transit issues.

We all are aware that trade, transit and connectivity constitute vital components of Nepal-India bilateral relations. India is not only our biggest trading partner but also the main transit country for our third country export and import.

Twenty years back, trade with India accounted for only a third of Nepal’s total foreign trade whereas the proportion has now increased to almost two third. Our trade linkage with India has increased both in volume and proportion.

As good as the growth in trade volume is, growing trade deficit with India has been a matter of serious concern for us over the years. How can Nepal bridge up this unsustainable gap between what it exports and what it imports? How can we expand our trade base particularly export trade? Does our bilateral trade treaty require a review, particularly in the context of the evolving arrangement under SAFTA in order to ensure that exports from Nepal would receive a more facilitative treatment than what is already there in SAFTA? Or the operational and administrative aspects on the ground are more critical for trade facilitation than the treaty itself? How do we address the issues of non-tariff barriers? Now that India has embarked on the implementation of tax reform in the form of GST, what will be its implications on bilateral trade? These are the key trade related questions that we expect to deliberate on and receive insightful feedback from expert panels in the 4 thematic sessions scheduled for today.

Trade and transit relation between Nepal and India is not a new phenomenon. Just like other components of our relations, economic engagement between our peoples has a long history.Exchange of goods and services was an indispensible part of the regular chores of our people. Long back, Nepal was one of the major entrepots of trade and transit in the whole region.

What we have done in the modern days is build upon the long held traditional economic interaction and convert it into a rule-basedsystem. As a result, we have today an elaborate arrangement of treaties, protocols, agreements and MoUs of varying scope, content and character. One of the objectives of this programme is to have a review of the existing trade and transit related instruments applicable between us and see where improvements can be made in order to further strengthen the economic component of Nepal-India relations. We all know that in today’s globalized world, economic progress counts more than any other national pursuits.

Cross border infrastructure and state-of-the-art connectivitymeans are the sine qua non of strong economic engagement and this is the area that did not receive adequate focus and commitment in the past. Where geography is easy, time and cost of building highways and railways are less. We did not adequately cash on this gift of geography for years in order to build up better connectivity.

There are at least a dozen points in the proximity of Nepal-India international border, for example, where Indian railway heads reached decades ago. Long before, we could have extended railways by some more kilometers to reach Nepal and sped up trade, transit, flow of tourists and movements of common people in all those points.

Better late than never. We are implementing cross border railway projects at two principal border points and three more such cross border railway projects are in pipeline. Just a few months back the announcement by Hon’ble Railway Minister of India about linking Kathmandu with Indian railways turned out to be welcome news in Nepal. We hope for the early concretization of the project.

Our roads are turning out to be better on both sides. However, in most of these places, cross border roads still pass throughthe bottlenecks of crowded marketplace and our trucks wait for hours to cross these crowded stretch of a few kilometers — sometimes ridiculously longer than the time they spend to ply for miles over the newly built highways. Both governments as well as other stakeholders on both sides are cognizant of the situation and we have started to upgrade infrastructure. What is required is some more speed in the implementation of projects like ICPs and the roads linking the national highways on both sides.

So, in various sessions today, we will reflect on the normative as well as operational aspects of trade, transit and connectivity between Nepal and India. Deliberations here will provide valuable inputs for how our two governments and other stakeholders seek to engage in these areas in future.

I thank you once again for sparing your time and look forward to insightful discussion.